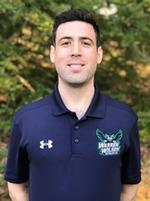 Before coming to Warren Wilson, Coach Gold was the Head Coach at DIII Emerson College from 2012-2016 and an Assistant Coach at The Savannah College of Art and Design from 2016-2018. Coach Gold has also been a part of many youth and club lacrosse programs including the Golden Hares out of Savannah, GA, and the Brooklyn Lacrosse club in New York City.

As a player, Gold led the Emerson Men’s Lacrosse team as a 2 year captain, and attained All Conference honors his sophomore, junior, and senior seasons. Coach Gold has since graduated from Emerson College and The Savannah College of Art and Design with advanced degrees in Film Production and Visual Effects.

Born and raised in Randolph, New Jersey, Coach Gold graduated from Randolph High School. Gold was a three-year Varsity letter winner in Lacrosse, was part of 2 state championship runs, and earned All-league honors his senior season. In 2012, shortly after graduating from Emerson College, he was named Head Coach at his alma mater, making him the youngest Head Lacrosse coach in the country at 22 years old. Since then, he has gone on to coach 5 All-Conference players as well as be a part of 2 NAIA playoff teams.

All Warren Wilson Men's Lacrosse camps/clinics are open to any and all entrants (limited only by number, age, grade and/or gender)